It was 2009 when Jamie Lee Curtis was photographed without the make-up, photoshopping and so on that protects that sort of person from reality.

“There’s a reality to the way I look without my clothes on,” she says. “I don’t have great thighs. I have very big breasts and a soft, fatty little tummy. And I’ve got back fat. People assume that I’m walking around in little spaghetti-strap dresses. It’s insidious—Glam Jamie, the Perfect Jamie, the great figure, blah, blah, blah. And I don’t want the unsuspecting forty-year-old women of the world to think that I’ve got it going on. It’s such a fraud. And I’m the one perpetuating it….

Some years later when reinterviewed, she had stuck to her guns.

I’m simply mystified, in the case of Tracey Spicer, for example, why a person would rather look like the thing on the left than the person on the right?

The person on the right looks nice and quirky and fun and all sorts of good things. The picture on the left is plastic. The human being has been processed out of the body.

The same goes for photographic alterations to women, supposedly to make them look better. I showed Manny these women before and after the photographic ‘improvements’ made to them. He made the comment that the ‘improved’ women all look like robots. Is that the point?

Not only should women look like personality-less robots, but skinny robots too. Look at this picture from the link above. 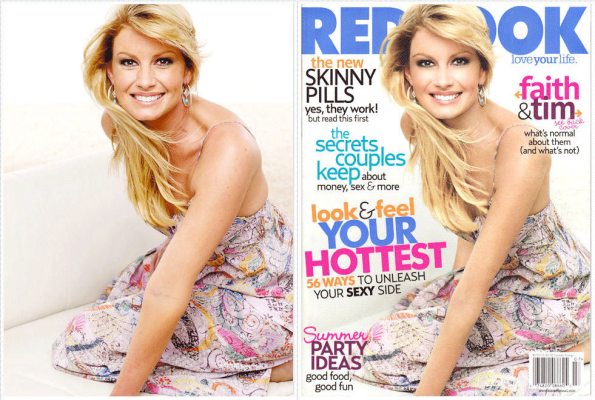 One of the problems that has been fixed up here is to make this women’s arms thinner so that we aren’t offended by their gross natural state. You WERE offended, right? You looked at that woman’s left arm and thought ‘Seriously? I have to look at that?’ At the risk of repeating myself, what the fuck? How could anybody actually think that the stick on the right looks better than the arm on the left???? Apart from that, the thing on the right looks plastic, it’s had the real person sucked out of it.

And females from the earliest ages bear the brunt of our willingness to be addicted to shit like this. They are raised now, expecting and desiring from the earliest ages to change their bodies to conform with made-up and misguided fantasies as to what they should look like. Aren’t women ashamed that they are bringing up their daughters to such a life? Tracey Spicer found that shame helped her overcome her addiction to ‘beauty’. Are other mothers taking this stand too? I hope so.

I’ve been thinking about style lately and one way or another my ruminations took me looking for women willing to be makeupless but nonetheless retaining an interest in clothing.

Sure enough I discovered a fashion trend about the movement away from makeup. But what astonished me about it was that it wasn’t about not wearing makeup at all. It was about wearing makeup that didn’t look like makeup. The companies who deal in this stuff are only too happy to oblige, as this Wall Street Journal article reports.

The point is that makeup is an addiction. It’s based on a sick idea that women need to cover up what they really are. It’s about a belief that what you are isn’t good enough. These women who wear makeup would as soon step out onto the street without a stitch on as leave home without ‘their face on’. It’s even called that, isn’t it? ‘Wait while I put my face on.’ I wonder how many male partners have put up with that line over the centuries?

Tracey Spicer gained some notoriety last year, I gather, for talking about her attempts to wean herself off the drug after, to her shame, she found herself having to explain to her young daughter why women have to wear makeup. She points out that there are personal costs in giving up makeup as we live in a society where women are judged by it and even find themselves being discriminated against in the work-place for refusing to use it. But that isn’t a very good reason for wearing makeup, is it? Why would a person put up with that discrimination any more than agreeing that their work will be appraised on whether they give over?

She lists the things she has gained by giving up makeup and associated activities such as spending a lot of money getting her hair done. One of them was that it gave her an hour a day to do other things like play with her kids.

Let’s do a bit of maths. Let’s suppose – and I imagine this to be conservative – a female spends 50 years wearing makeup and ‘doing their hair’. So that includes putting makeup on, taking it off, blowdrying their hair, doing your nails, that sort of thing. Let’s not start getting into time at hairdressers, beauty therapists, shopping for the makeup drugs of choice.

Let’s suppose that one sleeps 8 hours a day, giving waking hours of 16 hours a day.

1140 / 365 days in a year = 3+ years spent doing nothing but shit like sitting in front of a mirror changing how you look because how you are otherwise isn’t good enough.

I dunno about you, but on my deathbed, should I be so lucky to have one, I will regret not having enough time to have done everything I would have liked to. To read all the books, see all the plays, watch all the movies, cook all the food, go to all the places, see the world, spend time with my friends, play every bridge tournament, watch every chess game…the list goes on. Imagine at that point having to acknowledge that for every waking moment of THREE YEARS you could have spent doing these things, you instead spent sitting in front of a mirror changing how you looked. WTF.

For a detailed interview with Tracey Spicer on the situation and what she is doing about it, go to My new life without makeup.

Explaining her single status to the Press in 1957 when she was 36:

“For the moment, I like to buy my mink and diamonds myself.”

The reason for her withdrawal from the fashion industry after being one of its biggest stars:

“There comes a time in everyone’s life as a designer when you have to decide whether you want to create the beautiful or the merely fashionable. Sadly, there can be a conflict between the two,”

“No woman can be truly elegant until she is over forty,”

And, as if to prove the point, Gillian Anderson in 2012, over forty and wearing a vintage Connolly creation in the linen that made her fame.

You can find my learning French blog here.
Follow This and That on WordPress.com